30 years and over 1300 alumni since the first class graduated, the College of Veterinary Medicine was pleased to welcome back the class of 1981, along with founding faculty and former deans, for a Gala
celebration.  The Pegasus Gala featured special appearances by Jack Hanna, director emeritus of the Columbus (Ohio) Zoo and Aquarium and host of Jack Hanna's Into The Wild, a nationally syndicated television show, and the just-launched Jack Hanna's Wild Countdown.  Made possible through the support of Nutramax Labs, Inc., Hanna's visit to MSU-CVM will include an event for Starkville-area schoolchildren on Friday at 1:30 in the CVM Auditorium.  This show, featuring Jack's

exotic animals, was part of this year's 4th Annual Human-Animal Bond Lecture Series sponsored by Nestle Purina, and was streamed live on the CVM website.  An autograph session followed the show at 3pm.  Hanna also performed at the Hunter Henry Center on Friday evening at a Gala dinner.  Of his visit to the CVM, Hanna said, "It's great to be involved with events that celebrate people who dedicate their lives to animals.  Missisippi State's College of Veterinary Medicine has been doing important work in the field for over 30 years, and they've had such a  positive impact on the animal world."

The Golden Triangle Kennel Club is hosting their annual Responsible Dog Ownership Day tomorrow Saturday, Oct. 8th at McKee Park in Starkville from 10AM - 2PM. This will be great family fun and you can bring your friendly leashed dog too! Events include:

•    Meet the Breeds & Parade of Breeds
•    Microchip Clinic - hosted by the MSU-CVM Class of 2014
•    Josh Project
•    Rally Obedience Demonstration
•    Agility Demonstration
•    You and your dog can try the agility & rally courses after the demonstration too!

We hope to see you all there! For more info download pdf here.

Directions from the Vet School: Turn Left on Hwy 12 to Louisville St. Turn LEFT on Louisville street. Turn RIGHT on Lynn Lane, McKee Park is ~0.5 mile down Lynn Lane on your right across the street from the Sportsplex.
Posted by CVM at 3:15 PM

This is a great opportunity for the public to learn more about the veterinary technician's (animal nurse's) role in protecting and caring for pets. It also is a great time to enjoy lots of games and activities, and spend time with your pets in an animal-friendly environment. Everyone is encouraged to come and bring pets. However, all animals must be kept on a leash and be up-to-date on their vaccinations. For more information, please contact Chelsea Boutwell at cmb758@msstate.edu. Flyer for more info
Posted by CVM at 3:46 PM

Employee of the Month 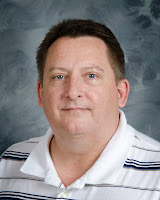 Erle, a research associate for Dr. Jan Chambers, has worked at the College of Veterinary Medicine in the laboratory for 21 years, doing "everything from chicken to catfish to toxicology."  He says the time here has passed quickly due to the variety his role provides, and the different people and learning opportunities he encounters.  Starkville native Erle and his wife Melissa have a daughter, Betsy, who is a senior at Mississippi State.  In his spare time, he enjoys reading, relaxing and sports.  He and his family are avid tailgaters and Mississippi State football fans.
Posted by CVM at 9:32 AM